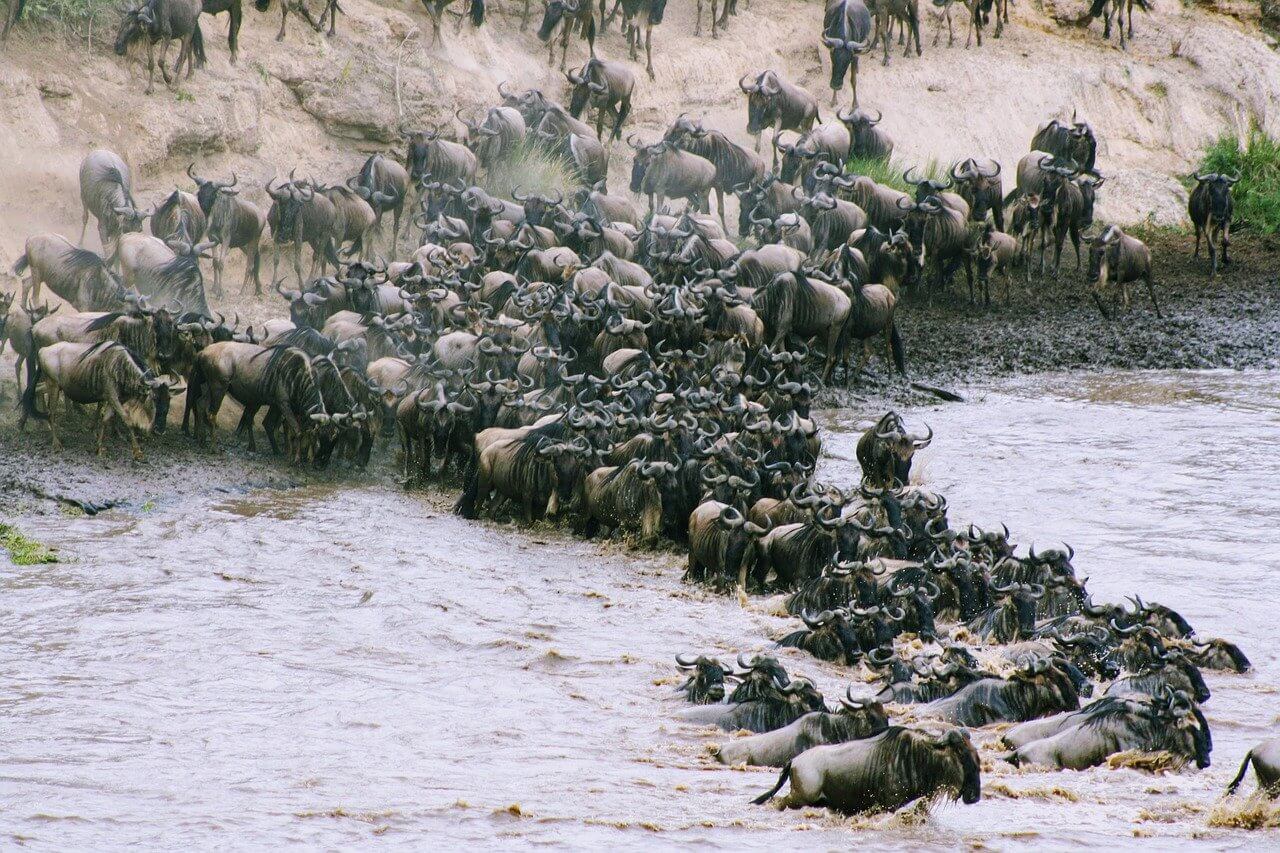 The Great Migration is awe-inspiring to view and also experience the Earth, shaking as 1.5 million wildebeest, and thousands of other grassland animals, migrate across the plains of the Serengeti National Park in Tanzania. As a result, the Great Migration is one of the eight natural wonders of the world.

The dates and times to experience the Great Migration of the Serengeti depend on the seasonal rain and pasture availability. However, most experts suggest planning between December and March. Besides the migration of animals, there are also many predators and herbivores in all the camps of the Serengeti National Park. Consequently, it is an excellent year-round holiday destination.

What to Expect from the Serengeti National Park Wildebeest Migration

The Serengeti National Park wildebeest migration does not only consist of migrating wildebeest. Thousands of other grassland animals accompany them on this journey, and you can also expect to see zebra, gazelle and many more. Most importantly, they are trailed by a host of predators, waiting to pounce on the weak and exhausted animals. As a result, this makes for exciting game viewing for the adventurous tourist, who is willing to wait patiently for the circle of life to unfold in front of their eyes.

Watch as a multitude of wild gnus pours across the landscape, driven by their instinct and necessity to survive. They undertake this perilous journey of dare or die, acting as one entity. Each of them knows that separation from the herd will inevitably end in death.

This epic journey is one of endurance and violence through a gauntlet of granite kopjes where cheetahs and lions lie in ambush. They cross crocodile-infested flood-swollen rivers and plains, scorched by wildfires to arrive at their northern sanctuary.

They will start their 1,800-mile journey in a clockwise direction through the Serengeti National Park. This predictive cycle assists the tourist in planning how to witness the Great Migration route. Kusini, the Ngorongoro Conservation Area, and the Maswa Game Reserve, are the best places to follow the wildebeest from November to March. The November rains usher in the arrival of the wildebeest herds on the Serengeti plains, where they give birth.

Until April, the wildebeest and their calves will stay on the Serengeti plains reaching as far as the Ngorongoro Conservation Area. During the calving season on the southern plains of the Serengeti, more than 600,000 calves are born yearly. Kusini in southern Serengeti is also known for its cheetah project. Predators like lions, cheetah, hyena and jackal eat their fill, but the majority of the wildebeest survive to make the journey.

By early June, the receding riverbeds signal the start of their journey north for greener pastures. Around April, May and June, the herds travel in a western direction. Harassed during the journey by lions, cheetah, and other predators, they will push on to the north for better pastures.

At the Grumeti River, they face the Nile crocodile that is lying in wait for them. Consequently, starving crocodiles are ready to grab them as they come to quench their thirst at the dry river pools. As a result, many hundreds will perish while crossing the river.

By early June, the receding riverbeds signal the start of their journey north for greener pastures. Around April, May, and June, the herds travel in a western direction.

Harassed during the journey by lions, cheetah, and other predators, they will push on to the north for better pasture. Moreover, at the Grumeti River, they face the Nile crocodiles that are lying in wait for them. Consequently, starving crocodiles are ready to grab them as they come to quench their thirst at the dry river pools. As a result, many hundreds will perish while crossing the river. However, some will choose a detour around the river, which may cause them to die of thirst.

Further north, these wildebeest herds divide into smaller groups as they gather around small water bodies also filled with crocodiles. Therefore, Central Serengeti’s kopjes are the perfect vantage point to observe the massive herds of hooved animals passing over the plains.

From April and May, when they return, the males are preoccupied with the urgency to select their harem and defend their territories. They then congregate into smaller herds again as they return to calves in the southern part of the Serengeti National Park.

During the year, the central Serengeti provides other attractions for tourists apart from the migrating wildebeest. For instance, the grasslands team with a variety of herbivores like impalas, buffalo, hippos and topics that do not partake in the migration. Most importantly, there are the ever-present predators that include:

At the Mara River in the Masai Mara National Reserve in Kenya, the migration’s climax is from July to September. The already exhausted animals now must negotiate the rain-swollen Mara River. Consequently, animals that don’t drown here will struggle to get out of the mud or fall victim to crocodiles.

These animals’ strength and courage determine their survival during this raw and moving tragedy, as each wildebeest is part of a unit that depends on the herd for survival. Consequently, the struggles of the migrating wildebeest continue as the depleted herd staggers onward to their destination.

Enjoy the Serengeti National Park migration east of the Grumeti through the Lobo and Loliondo at the majestic Gol mountains. From October to November, the wildebeest pass through the central east valley to the north after the rain. As a result, they pour through to the scenic pastures at the Angata Kiti bottleneck.

• Serengeti Under Canvas – moves around on a standard route

If mobile camps are too adventurous for you, the Serengeti National Park has various lodges that offer all the creature comforts you may crave.

• Lemala Ndutu Camp in south Serengeti is Moroccan is best for February to March migration.

• Singita Faru Faru Lodge is located in the western Serengeti with all the Afro-chic comforts for viewing the June migration of the wildebeest.

• Olakira Migration Camp is the best place to be when the migratory wildebeest enter the northern Serengeti plains.

• Namiri plains Camp is the best place to view the eastern part of the wildebeest’s great migration.